My Memory of Lionel Batiste


When I was skimming headlines on msn.com last night, I was two stories down before my heart skipped a beat. Uncle Lionel Batiste is dead. Wait … what? I had to back up and read it again. Lionel Batiste. I know him!
To be honest, I don’t actually know Lionel Batiste, a huge figure in the New Orleans music scene, but he made a big impression when I ran into him about two years ago. As I was entering the courtyard of the legendary Preservation Hall to meet up with my jazz tour, he was finishing up a photo shoot.
Most of my family and friends know that I adore the music and culture of New Orleans. I’m also a huge fan of Tremé, the HBO series about the city, so I immediately recognized Uncle Lionel and his Tremé Brass Band drum.
All I could think of was getting a picture of that drum because I was certain that I would never come across anything that screams New Orleans like that beat up instrument. Had I known at the time that Uncle Lionel had used his drum to keep himself afloat in the post-Katrina floods, I probably would have passed out on the spot.
As I stood there trying to work up the courage to ask permission to take a picture, Uncle Lionel was packing up his things. I knew that he’d be gone in a few moments.
What if he thought I was crazy for asking? What did it matter since I’d never see him again? What if he said no? And why were the other few guests meandering around looking more interested in starting the jazz tour when a living, breathing musical giant was standing right in front of them? 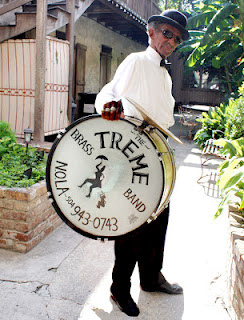 Ah, what the hell? “Hi, do you mind if I take a picture of your drum?” I practically whispered, and my heart stopped as I waited for his response.
Slowly, he turned around and picked up his drum. Oh, no, you idiot! Why didn’t you just walk over and take the damn picture before he had a chance to move the drum? I can’t believe I upset him so much that he’s going to hide it. Now I’ll never get my shot!
Suddenly, he turned to face me and struck a pose with the drum. This was too good to be true! My heart resumed beating and began to pound furiously. I only had seconds to get the shot. I was looking straight into the sun. I was too close to get a full body shot.
He started to lower the drum, and I snapped as quickly as I could, praying for the best. Then, despite his age and frail build, he disappeared with his drum in an instant.
I spent the next few minutes willing my heart back to its normal pace, trying to look nonchalant about my run-in with a legend. Inside the tiny, dark hall, I struck up a conversation with the photographer, who explained that he was working on a book of photos of famous musicians posing with their instruments. He soon excused himself to shoot his next subject, Mardi Gras Indian chief Monk Boudreau, who was waiting patiently while we wrapped up our chat.
I don’t know whether it’s the Southern culture or the fact that musical talent is the norm in New Orleans, but it’s remarkable to me that musicians in this town mingle with the masses and don’t put on any airs. In any other city, they would be surrounded by an entourage and a throng of fans and paparazzi. Despite this unusual attitude, I preferred to focus on my success in shooting Batiste rather than pushing my luck with Boudreau, so I faded into the shadows to wait for the tour.
When the tour guide called us together and led us back into the light of day on St. Peter Street, he offhandedly revealed the identities of the gentlemen we had seen inside. The rest of the group, assuming the New Orleans attitude, seemed unimpressed. As for me, it was the highlight of my trip and a memory that will last a lifetime.
Rest in peace, Unc. Enjoy your second line.
Keywords: Lionel Batiste, New Orleans

No comments posted.
Loading...
Subscribe
RSS
Recent Posts
Olympic Facts for Those Who Can’t Get Enough of the Games Culture Club: Asian Pop Comes to Town Get Your Art on in Baltimore 6 Rules for Finding the Best Airfare My Memory of Lionel Batiste Interrupting the Heat Wave with a Simple Writing Request Use Your Smartphone Wisely When You Travel It’s in the Bag: 5 Packing Tips for Simpler Travel Cash or Credit? You Need Both for Overseas Travel Introducing My First Stab at Blogging
Keywords
travel Baltimore vacation England London Olympics trivia Asian pop culture Otakon otaku
Archive
January February March April May June July August September October November December
© Joanne Drummond. Photos may not be copied or reproduced without permission.
User Agreement
Cancel
Continue